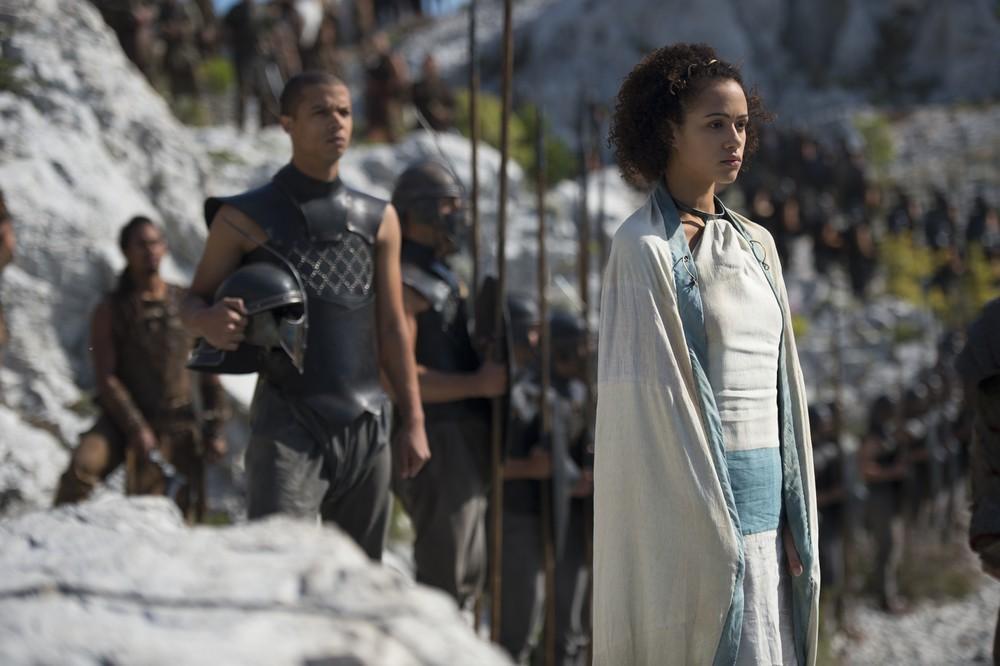 The Common Tongue is spoken in Westeros, but that’s not the case across the Narrow Sea. Missandei’s translations for Daenerys and her entourage are the work of David Peterson, the linguist who created Dothraki, High Valyrian and multiple dialects of Low Valyrian. By his own estimate, Peterson has crafted over 5,000 words.

Peterson shares the unique challenges of creating languages for the show, writing dialogue for Dany and what ‘Monty Python’ has to do with Meereen.

HBO: How did the culture of Essos influence you the languages you created?

David Peterson: Two major factors come into play. First, the topography of the area, which helps determine what these people do and don’t have words for, and what their lifestyle is like. I think about these people and ask: “What are their lives supposed to be like?”, “Who do they interact with on a regular basis?” and “How do those interactions shape their own culture?”

The second factor is their level of technology. The world of ‘Game of Thrones’ is at a significantly lower level of technology than the modern world. And in the case of Dothraki, they are at a technology level that’s below even that. It seems that their culture is very insular. They don’t let their interactions with other people influence their lifestyle. What that said to me is that the Dothraki are going to have words for their own lifestyle, and they may borrow other terms. For example, the Dothraki word for “book” is borrowed from Valyrian.

HBO: Was your process similar for creating Valyrian?

David Peterson: Valyrian is a very different type of language. We don’t really have a window into the Valyrian culture at all. It’s one of the great mysteries in the book series. Furthermore, the culture and all of the speakers are now dead. The language has been handed down from generation to generation and it’s a fossil of a bygone era.

In that sense, it’s been difficult for me. Human experiences are always going to be roughly the same, so I can come up with words for how people feel and basic things like that, but I haven’t gone out on too much of a limb on the culture. I tried to stay away from things that describe daily life.

That isn’t the same with the Low Valyrian speakers. While they’ve inherited the language, they’ve also inherited some words from their own culture – Ghiscari. They’re a living people, so I can use what I know about Slaver’s Bay to inform the language a bit.

HBO: Can you give an example where High and Low Valyrian differ?

David Peterson: The Low Valyrian that the slavers speak takes a lion’s share of its vocabulary from High Valyrian, but most of the terms regarding the slave trade have been taken from Ghiscari. The word for “slave” in High Valyrian – which Daenerys would know –doesn’t look anything like the word for “slave” in Low Valyrian, and I did this on purpose to kind of distinguish the two. Back in Season 3, Daenerys she uses Low Valyrian word – “buzdari” – when speaking to the slaves: “Zaldrizes buzdari iksos daor,” a dragon is not a slave. It makes her point more forceful and makes sure that they absolutely understand what she’s saying.

HBO: Do you pass along any tips to the actors when they’re learning the language?

David Peterson: I did with Dothraki. I didn’t really do so with Season 3 or Season 4, and honestly, I haven’t needed to. The cast has gotten better and better at working with these languages as the show has progressed.

HBO: Are any words you created based on your personal life?

David Peterson: Oh yeah – my wife has a word in every language. Her name is Erin, which is the basis for “kind” in Dothraki. My cat’s name is Keli and the word for “cat” in High Valyrian is “kēli.”

HBO: Have you planted any Easter eggs in the show?

David Peterson: One of the biggest is from Episode 3 this season. There’s a scene where the Meereenese rider is challenging Daenerys’ champion. He’s shouting and Nathalie Emmanuel [Missandei] is translating – but she’s not translating what he’s saying. He’s actually saying a Low Valyrian translation of the French guy’s insults in ‘Monte Python and the Holy Grail.’ That was [series creator] Dan Weiss’s idea and it was so hilarious that I had to do it.

HBO: Have fans caught on?

David Peterson: They know that something’s going on. Right after that episode aired, I was getting tweets like, “Is he saying a ‘your momma’ joke?” Close… But no, he’s actually starting out with, “Your mother is a hamster.”

HBO: Out of all the words you’ve created, do you have a favorite?

David Peterson: A lot of my favorites end up coming from High Valyrian because that language is just shamelessly pretty. It was completely indulgent. I’ll stick with the word for dragon: “Zaldrizes.”

How exactly do you pronounce “zaldrizes”? Learn how – and other expressions – in our High Valyrian tutorial.
http://www.makinggameofthrones.com/production-diary/2014/5/8/interview-with-linguist-david-peterson